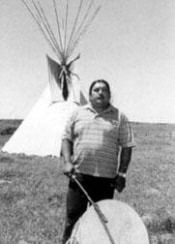 This program was one of the first programs recorded for the Oyate series. Wilmer Mesteth is from our own home state of South Dakota and is well known on the Pine Ridge Reservation. He is a full-time instructor for Oglala Lakota College in the

Lakota Studies Department and is deeply involved in the music and culture of Lakota people. Wilmer lives with his wife, Lisa Standing Elk and their children. They have six children and one grandchild.

Wilmer was born in 1957. Wilmer is a history buff. He likes learning about many other tribal cultures and also likes recreating artifacts from his people’s culture. Although Pine Ridge is nearly two hours from the Black Hills, the hills are still considered to be sacred to the Lakota people. It was there that they gathered to celebrate and pray. The Lakota call the Black Hills “He’Sapa.” The U.S. government seized the hills when thousands of gold-seekers flooded the area. Although the general population may still know them as the “Great Sioux Nation,” most of the people prefer to be called Lakota, Nakota, or Dakota depending upon their ancestry. One interpretation is that of the word “Sioux” was thought to mean, “little snake” in French and Ojibwe.Originally, this large tribal family called themselves the Oceti Sakowin, or Seven Council Fires, which was made up of seven bands that were split into the three groups named above. These large and far-ranging tribes made up a strong and powerful Plains nation. For the great Sioux Nation the fall from power and strength was a painful one. They stood and watched as a sea of settlers and gold-seekers crawled over their lands in numbers so great that the plains looked like a busy anthill.