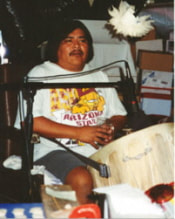 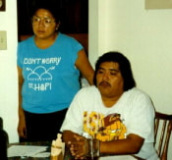 Forrest Chimerica lives in the sprawling city of Phoenix, Arizona. His home is a ranch style that looks like dozens of others—until you step inside. There the rooms and walls are filled with the signs of his culture. Forrest went to school in diesel mechanics, but after a devastating car accident that put him in the hospital for many months, he turned his attention to the arts and culture of his people.

Forrest drums and sings for a youth dance group that was started by a single performance and has now grown to many members. He carves Kachinas, earrings, and other items and travels the well-known Indian fairs to sell his wares. The Kachinas are sacred objects. Forrest feels strongly that people need to be educated in order to regard these items for what they are, items of spirit. He has a short stature and a face and smile that instantly makes you feel at home.

Forrest is a member of the Sun/Snake Clan, born in 1957 in the village of Moencopi, west of Third Mesa on the Hopi Reservation. He is in his mid-thirties and lives with his wife, Cheryl, and their two children, Janet and Charles. Of the many native tribes of North America, the Hopi tribe has perhaps come closest to maintaining their original lifestyle.

The lands and villages are among the longest occupied sites on the continent. When the Spanish arrived, the Hopi people had little to do with them. A peaceful, civilized nation, they maintained their agricultural lifestyle and, to this day, preserve many of the traditions and religion of the original culture. They never entered into treaty with the United States.

The Hopi Reservation, created by the United States government in 1882, while smaller than their original land mass, still centered around the mesa villages that had been their homelands for as long as can be remembered. The reservation is located in the northeastern part of Arizona.

The main villages of First Mesa, Second Mesa, and Third Mesa are located atop the mesas. The oldest village is Old Oraibai and Shangopavi and the newest is Hotevilla. Women whose men had been incarcerated by the United States and sent to Alcatraz Island constructed Hotevilla in 1906.